Deep-dive into Entity Storage - Join us LIVE on 26th May 2022 5:30 PM ISTRead More   →
Support Home Solutions Admin Settings Workflow How to use workflows with Webhooks in Freshsales?

How to use workflows with Webhooks in Freshsales?

Webhook is used to send HTTP requests to a third party app or web service every time an event(when conditions are met) occurs in Freshsales.

This URL of the app or web service that’s hit by the API request is called a callback URL.

For eg: When a deal is won, you can send a request to generate an invoice from a third party app using a webhook request.

Who could possibly configure this?

You may configure HTTP URLs and associate them in workflow rules to automate the entire process.

Let’s see how to configure one such case.

Scenario: When a deal is won in Freshsales, an external invoice generator automatically generates an invoice via a webhooks request.

How to setup a Webhook request in Freshsales? (Learn more)

Description: For every deal won, automatically generate an invoice from Invoice

Execution trigger: Once, when it’s created or updated

a:  Choose the Request type as POST. (We are creating an object(invoice)).

The request types available in Freshsales are:

Each 3rd party app uses the request type in a different way, but most applications follow standard methods.

c:  If the third party application’s URL that is going to be hit requires authentication, then

check the Requires Authentication option. You can authenticate either with,

d:  Add custom headers to pass along some additional information with the content such as security details, API version details and so on. A custom header has to be entered as a header-value pair in the following format: X-Sample-CustomHeader1: VALUE.

e:  Let’s select JSON as the encoding format and choose the Simple content(Deal

details) that needs to be sent as a part of the webhook request.

Account) as the fields to be sent as a part of the HTTP request. 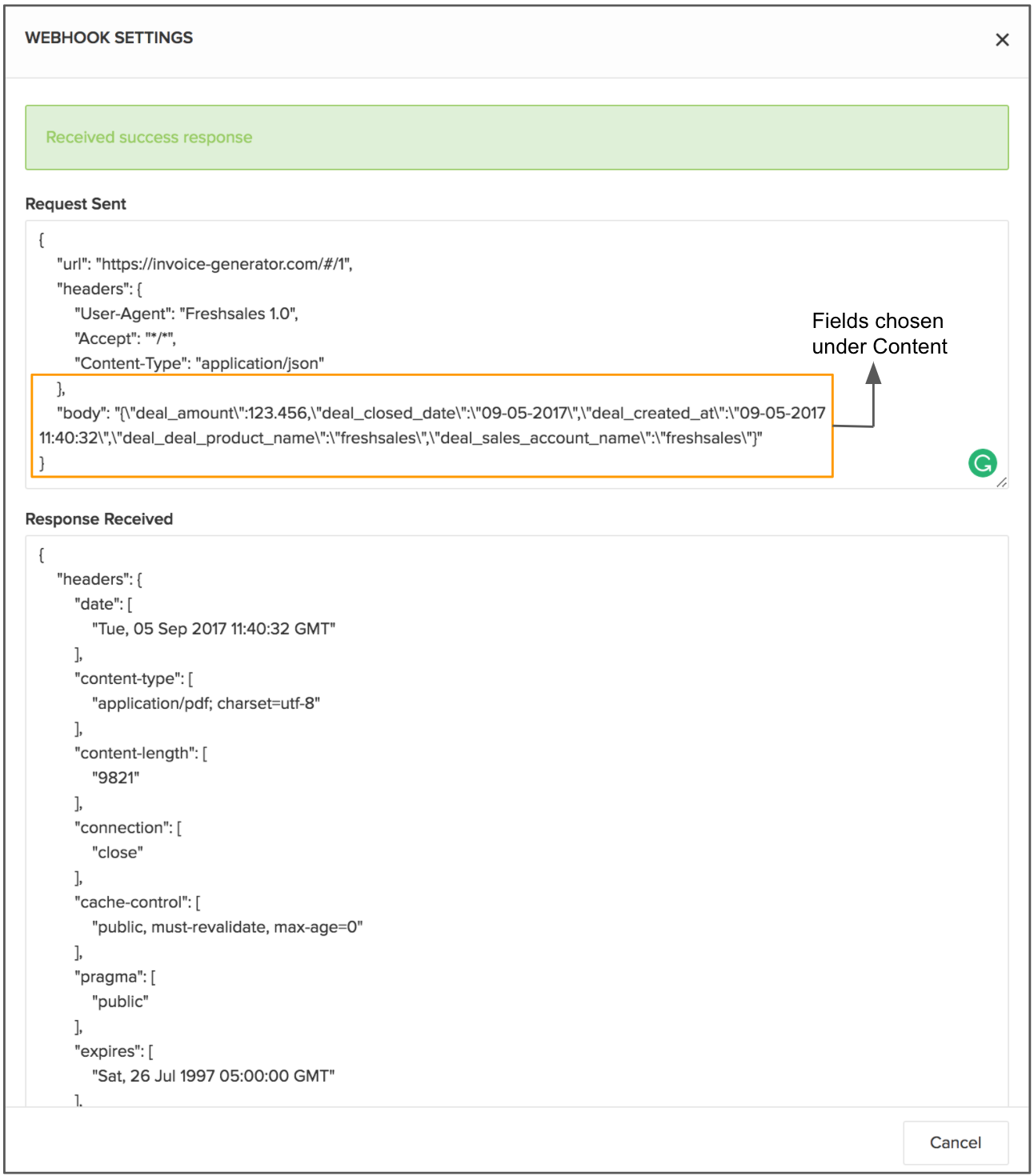 g:  Save the settings.

7. Either Save & Start the workflow immediately or just Save it for now and activate it later.

How do I test if my Webhooks request is working?

You can test a sample case using the Test URL option. The callback status code comes up as a toaster message.

Status codes other than 2xx indicate failure of the callback.